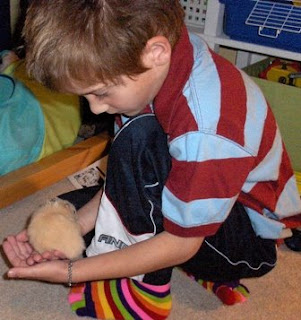 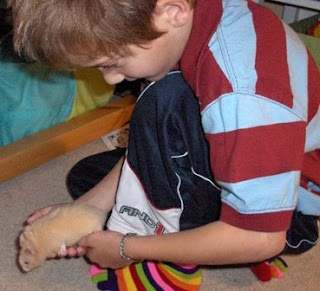 Sounds like Mario lived a good life in the care of his human buddy. Hugs to Mason.

I'm so sorry. The "it's a $9 rodent" vs "my kid's best friend" thing is hard to juggle. Remind me to tell you one day about the $70 vet bill to take a free-from-Craig's List mouse to PetSmart to be "put down."

Yes, I really did. How do you tell your six year old that Snowball doesn't deserve medical care when she's obviously in distress for over a day? I'm glad Mario went quickly and quietly.

is it just a little odd that my post this evening was about a dog we found and "rescued"?

Loving a pet like that is a special thing. I'm sorry. Hugs to your boy.

Hugs to Mason, who knows you can't put a price on a friend.

Oh, that did it. Never cried for one of your posts... till now.

I have had hamster pets in college, and they were always a cheery, fun pal - especially rolling in those plastic balls.

Hamsters have a naturally short lifespan, apparently because in their native habitat they have little to no predators to keep their numbers in check.

Oh no! I hope your son recovers quickly. **HUGS**

I'm so sorry about Mario...poor Mason, to have this happen around the holidays.

I'm truly sorry for Mason, losing a pet can be devastating.

But part of me wonders, whether or not, you cheered just a little bit in your head when you realized Mason just handed you some blog material on a silver platter.

The only proper way to honor Mario is with a Youtube video of his funeral...get on it!

Poor Mario. He was a great little guy.

Sarcasm is just one more service I offer. said...

Oh no....I'm so sorry. Those little guys just don't live very long unfortunately. I had the same experience as Shana except mine was a rat. $100 bucks to have the vet put her to sleep. I was amazed. I'm glad Mario went quickly.

oh, mario. So sad. We are a petless home and I think that's the saddest!

Lot of hamster news in the Blogosphere of late, huh?