leader of the pack 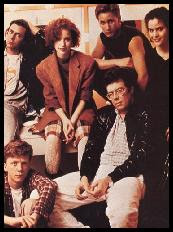 As I have been staring down the barrel of middle age lately and reflecting on who I really am (and why), it occurs to me that a great deal of my personas throughout the years have been based on characters in John Hughes movies.
I saw Sixteen Candles the summer I turned 16; I was in love with a cute Canadian boy who sometimes returned my affections, and I was adored by a geeky clown whose affections I couldn't appreciate. I frequently wrapped a ribbon in my bobbed hair and rolled my eyes a lot.
When I watched The Breakfast Club, I honed my attraction to bad boys. I tried to be as pretty as the Princess yet as edgy & artsy as the Basket Case; I still attempt to maintain that balance, frankly.
I discovered the depths of my OCDness while watching Weird Science; the madcap messes stressed me out. Though I totally appreciated the message that hot girls are not necessarily the [only] answer to all boys' needs.
Pretty in Pink was my senior year anthem; I can still sing every song on that soundtrack and every one will make me weepy. I felt so validated and inspired by Andie's thrift store wardrobe style that I [sometimes unfortunately] copied it into college.
I went to see Ferris Bueller's Day Off during the first days of my freshman year at WSU. Every moment of that movie was fantastic in a way that made me feel hipper and cooler and ready to figure out where I was going in life, but with flair.
She's Having A Baby came out a decade before I became a mom, but it has always been a touchstone for me & my man. We quote lines to each other all of the time, to de-escalate potential arguments ("Don't forget to tell him what I think about HIS GIRLFRIEND!") or ponder strange foods ("Grouper. It's grouper."). It all made much more sense once we started down the road to parenthood; I presented Stu with the soundtrack after my first positive pregnancy test. Plus I cut my hair like adorable Elizabeth McGovern and bought as many maternity outfits like hers as I could find.
John Hughes was a genius at portraying the sometimes stark, often painful realities of life with care & humor. His characters were pieces of people we knew, people we had been, people we could be. I'm sad that he won't be making more movies to speak to a new generation, yet what he created will endure - because even though the hair & clothes & slang are dated, the voices & feelings are not.
"And in the end, I realized that I took more than I gave, I was trusted more than I trusted, and I was loved more than I loved. And what I was looking for was not to be found but to be made." ~ from She's Having A Baby, 1988

Thanks to Hollywood Teen Movies for the picture & details
posted by stephanie at 12:51 PM

She's Having a Baby is a vastly underrated film. You're right--it was complete genius.

I remember buying my oldest daughter Breakfast Club when she was about 12-it was her favorite for many years, so that film definitely stood the test of time.

I can't think of anyone more relevant to our generation.

So many iconic films. The world lost a genius.

I miss when you make grouper.

Seriously, I can't think of another filmmaker who was (is) so good at capturing the subtle yet remarkable bookmarks of a generation. His films had characters that we knew, ones we wanted to be, and ones we were afraid of.

Great post! I love your comparisons of the films to your life.

Wow, that was an amazing eulogy! He did so many great movies that all of us over "a certain age" can identify with. I wonder if he realized how much influence he had on our generation.

Ferris Bueller's Day Off is a classic film that both my husband and I get more from each time we watch it.