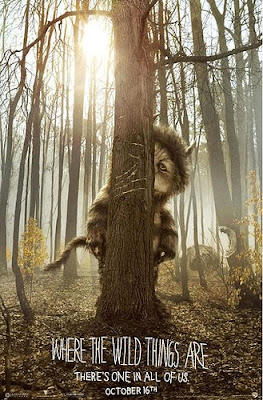 Uh-oh. I'm now not looking forward to seeing it as much as I was because, like you, I love the book so much that I can probably recite it backwards. And really? I hate being even slightly disappointed by movies. Harumph.

as it turns out, the sailor and i took all five kids to it last night. i walked away with the same thing. psyches. bleh. i love the dirt clod war and the snowball fights and was discontent with the sadness they ended with. i didn't like the dig dark guy who always stood alone and never said anything until the very end and then he said, like, meh, nothing. i'm pretty sure my high school boyfriend would've liked it, in a clockwork orange, mc escher way. but we were just all, eh, who cares? it didn't ruin the book though. because it wasn't the book. the whole thing where kw lets him out of her stomach was like she was giving birth to him again. yech. missed its mark.

Damn. The question I'm asking is whether Sendak wanted it this way all along, but the book was less overt than he'd hoped to be....

When you didn't squeal Friday night on FB about this movie, I knew it must have missed the mark.

It's a hard mark to make, out of such a beloved book of so few words.

Still, my hopes were high and this is just what I was worried about.

I adore your FIlm Student exegesis of the book. (I don't think I used "exegesis" correctly.)

Also, the movie previews made me want to see it (I'm a big Wild Things lover), but I trust your opinion too much. I know that if you were "meh," I will be too.

That's the danger with trying to reinterpret--in a different art form-a beloved piece of work. It's pretty hard to nail it.

Spike Jonze turned into a total DB after he divorced Sophia Coppola and started dating teens/early 20-somethings, so I had no high expectations of this.Thus I did not go (I rarely go to movies anymore, anyway.)

That guy peaked with the video to *Praise You* (which, is absolutely brilliant!)

First, that big quiet character probably represents the person inside all of us who longs to be included in the fun but is too shy to ask. He probably represented Max's desire to be accepted and included. But, that said, I will admit to being totally un-intellectual and very NON literary, so what do I know?

Now, I have to ask, am I the only party pooper out there who never liked "Where The Wild Things Are"? I never had an imaginary friend - it was never any fun trying to imagine what other people would say. I never played Barbies by myself - only with friends who could be the personalities of their own Barbies. I was never one much for imagination. Probably the reason I love Math and can NOT get into any literature that isn't 100% straightforward.

Does that make me the worst parent ever? That I can't relate to this book? I just don't see the pull. My favorite kids' book is "The Monster At The End Of This Book" by Grover from Sesame Street (aka Jim Henson).

But thanks for the review! Now I can save myself $20!

I think I will take your suggestion and wait until it comes out on DVD. That way if Miss Pink doesn't like it we can save some money.