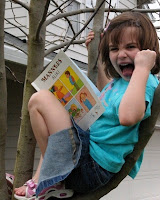 One might wonder why I don't bemoan the antics of my daughter. Hasn't she inspired the grievous headaches you can feel just from reading my posts? Isn't she complaining about homework, lack of appreciation, or injustice in the world? Doesn't her sanity launch into the stratosphere when something has gone awry? Thanks to a merciful, loving God, the answer to all of the above is...not really. Of course God also has a sense of humor, so occasionally my dear daughter does lose her mind. But it's usually over realistic, expected things like not being able to go to a friend's house or running out of raspberry jam. And then she simply bawls and stomps to her room where she cries like a normal person, in private and without shouted diatribes against humanity. Honestly, she is much more like my sister in this way, and my son resembles me. Without the confines of social mores, I would probably howl and rage far more often, too. Paige is generally content, happy to be by herself most of the time (which I guess explains the extreme meltdown when she finally wants to play with a friend but is denied), yet she has a quiet rebelliousness a la Aunt Shel. I have to say, I was scandalized when my sister first scoffed at me. She was 17, I was home visiting and she called to say she was going to stay out later (it was about 10 pm). I asked when she thought she'd be back and she actually sighed, telling me with an I'm-totally-rolling-my-eyes-at-you voice, "I don't know, whenever. Just tell Mom." Click. Scandalized! Partly because I am the oldest and had just become a very important teacher, but also because she, my silent, docile, good baby sister, had never acted that way. Or so I thought. Once Paige arrived in our world, a moody Cancer little sister to a showstopping, happy-go-lucky Libra, I got the picture. Mason overtakes a room with his charm and LOOK AT ME-ness, and Paige did (and usually still does) sit in the background most of the time. But then, when I finally got the hang of nursing while chasing a two-year old and resigned myself to no more naps, I began to notice her subtle defiance. She refused a pacifier (actually, this started at the hospital but I was in a drug-induced blissful state of denial; we tried three different kinds before giving up). She was never, ever still on the changing table; we retreated to the floor for diapers and dressing by three months to avoid bodily harm for both of us. She would not walk on her own until 17 months, and even then we couldn't miss the disgruntled glares when she would reluctantly pull herself up. To this day, and I still try because I am that kind of optimist, Paige will reject most suggestions sent her way, no matter if she had the idea in mind already - from foods to try to outfits to wear. Our biggest showdowns have been about clothing, and I know better but cannot stop myself from lecturing about patterns and textures and seasons. I am getting better - because I see the miserable results of moms haranguing daughters every day I teach - and work on battling only when it's about appropriateness. I am adamant about dressing for the weather, and for the age. So now we witness costumes going to school that remind us of early Elton John, but we button our lips. Well, I have to weld mine shut. And my darling daughter smiles in a sweet yet self-satisfied way that says, "I win." Click.
posted by stephanie at 9:23 AM

At least with Mason we (and the whole block) will know what he is feeling when the teenage years come. The quiet pouting of our little princess will be hard for me to bear. I love that pic. When she hams-it-up it cracks me up.

i too, am mom to a moody, independent, self-reliant, artistic cancer, god help me.

I love the way you ended with 'click'. You are so wise, picking your battles in the clothes department. There are some times Lexi picks out some very interesting choices, but after a few tearful mornings, I stopped giving my input. It wasn't welcome...

I don't know how to read Paige, but I have to say that after seeing me with you once or twice, she started saying 'hi Lisa' to me at school when we passed in the halls. I was so happy. I had a friend's daughter call me "Rachel" for over a year. And when I would tell her that was this other mom she would say 'whatever'.

AH! the joys of motherhood, no sis?! my biggest advice i could ever give (which you and stu already do) is to just encourage endlessly- if she wants to be a vegas showgirl- as much as it pains you- encourage it (with dance lessons). if you tell her she can do anything- she will thank you and love you all the more- even through the moodiness. and yes, let everything be her idea, and don't manipulate! cancers grow up to be able to sniff that out!