I've started watching The Tudors, even though it is grossly inaccurate and/or incomplete in many parts. But who doesn't want to revel in the beauty & decadence of royalty like this? 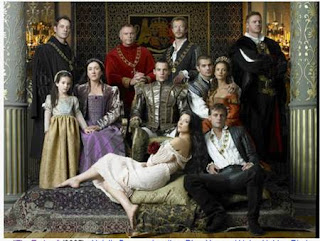 Through the magic of Internet quizzes, I have been compared to the lucky, if not rather homely and stinky, Anne of Cleves.
____________________________________________
Congratulations! You are Anne of Cleves!
Anne of Cleves got the royal shaft. She came all the way to England to become the fourth wife of Henry VIII. Once married to Anne, he refused to consummate the marriage, and called her the "Flanders Mare." Talk about a burn considering that by this time, Henry was the fattest man in England and had a rotting syphillis sore on his leg.
Anne was miffed, but she was too sensible to let it ruin her fun. She was given an annulment and a fat yearly allowance, and she threw extravagant parties and dined on delicacies for the rest of her life.
___________________________________
Updated: For some strange reason, the link to the fabulously fun quiz has broken. Beheaded? Or merely sent to The Tower? Who knows, but I'm not asking too many questions.
posted by stephanie at 9:14 AM