As promised, here is the scoop on what to do (and not do) when visiting Las Vegas, part 1 - Going Places.

Let me begin by admitting that Stu & I have had previous issues with distance perception. We have been known to believe in our hearts & minds that a destination is mere moments away when, in fact, it is hours. "A few blocks" versus "many miles." "Not far" versus "in a galaxy far, far away." We have gotten better, but the original defect remains and so this story will be far funnier when you believe that it is just one more piece of proof that we are traveling morons.

So, we wanted to visit the Hard Rock Cafe on Sunday while our *cough*nerd*cough* best friends went to the Star Trek Experience. I didn't have a real, decent map but figured the little street outline in the free 24/7 booklet would be fine. (Yeah. Typing "little" and "outline" and "free" suddenly makes it all more clear in the Bad Idea realm). I am proficient at reading maps and usually remember to check the scale so I have a more realistic [term used loosely] vision of how far places will be. This particular "map" did not have a scale. Red flag #13.

I convinced Stu that if we just went this way "a few blocks" then turned right here, we would run into the Hard Rock Hotel. Which I strangely believed to be attached to the Hard Rock Cafe; I am wacky that way. Anyway, we both accepted that it would probably be a couple of miles and take some time to get there, but it would be more sensible to walk instead of paying a cab since it seemed so simple.

We headed down Tropicana Avenue, la la la. The weather was actually lovely, with light breezes & a not-scalding sun - I think we brought our mild Pacific Northwestness down for the weekend (sorry to those who love the oven-like feeling of the desert). I identified roads & landmarks listed on the non-map as we passed them; all was going well [at least we knew we were headed in the right direction].

After a while, we decided that Las Vegas is deceptive in so many ways. The gambling - an illusion of opportunity; the shows - an illusion of beauty; the hotels - an illusion of worldliness. And the landscape - an illusion of closer than you think. When we finally realized the road we planned to turn onto was still a considerable distance away, Stu suggested we shortcut across an empty [gated, marked No Trespassing] lot. We could see the Hard Rock Hotel at this point and it did seem that we would be unnecessarily going out of our way if we continued down Tropicana.

So off we went down a side road through the lot. But we didn't notice from our previous vantage point that the road turned harshly away from where we needed to go. Our only alternatives were to a) go back to Tropicana and continue down to Paradise Road or b) climb up and walk along a culvert toward the Hard Rock. Normal people pick a). Adventuresome girls and boys pick the opportunity to shimmy along a chain link fence, trying not to slip on the loose dry gravel and fall into nasty, slimy dregs of humanity. 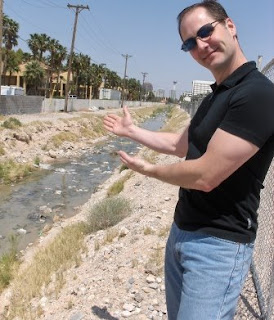 My beloved, trying to make it not so bad.

Me, my windswept hair, and the new Ed Hardys not as amused.

We finally arrived at the Hard Rock Hotel (that white building to the left of my head, above) after abandoning our culvert path to climb over a cinderblock wall and sneak through someone's back alley. Did I mention we originally got onto the gravel trail by slipping through a hole cut into the chain link fence? And there was some literature along the way, in case we were bored with trying to get out alive: 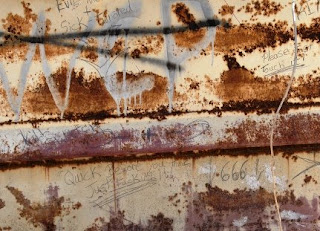 In the end, we ate at a restaurant in the hotel (not the actual Hard Rock Cafe) but did buy t-shirts and buttons from the shop because, by God, I was there. Eventually.

posted by stephanie at 4:51 PM