the holly & the ivy 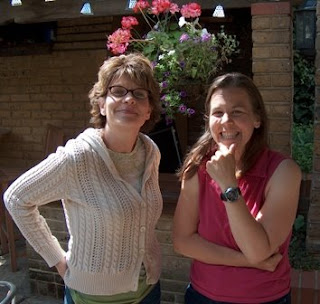 Tuesday last (don't I sound so European? heh), Stu & I met up with the lovely lady of Never Everland, aka Wales (via Wyoming), at an appropriately named pub in Hammersmith, The Salutation. She described our afternoon in delightful detail here; read that, look at her fun pictures, then come back. 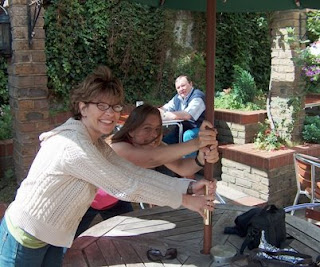 She forgot to mention the issue of wind & falling umbrellas. We were nearly killed by this thing. (And the gent behind us was not amused with our reenactment for the photo op) 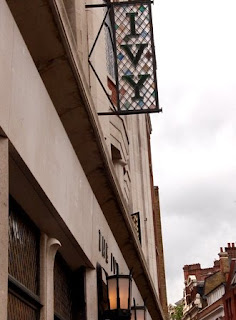 After touring The Tower all of Wednesday morning, Stu & I made our way back to Covent Garden for lunch at "one of the most sought-after pieces of furniture in London." I was a little nervous because I didn't want to seem out of place but we were instantly put at ease by the lovely older woman working the coat check. Because we didn't have jackets to give and she seemed so earnest about doing something for us, I was compelled to let her have my little shopping bag of Tower souvenirs [a move I will later regret]. We were five minutes early for our reservation (THIS I did plan ahead) and were greeted kindly by the maitre d' who told us it would be about 10-15 minutes before he could seat us. He offered a table in the lounge where no one famous was waiting. Not that I was looking.

We tried to get a glass of Riesling but it was only offered by the bottle [Have I mentioned that everything in Europe costs, oh, my annual salary? And the US dollar is worth about 5 cents]. I started to realize "10-15 minutes" was polite for "a very long time but thanks for making a reservation." But the waitstaff was extraordinarily kind - not the patronizing kindness that in the States means "I want your 20% tip and so will kiss your ass but really make fun of you in the kitchen." At least it didn't feel that way, and tips are actually not the custom in Europe. Finally, 40 minutes after our reservation time (and half an hour after lunch was technically over), we were given free drinks then shown to our table. Truly, I was impressed with their sincerity in apologizing for the lateness; I was dying to know who was hogging our spot all afternoon.

Our table was surprisingly not in a hidden corner, though Stu's chair was exactly under a very hot spotlight and somewhat in the path of all waitstaff passing by. But everyone continued to be polite & helpful (we needed to know what the hell "Bang bang Chicken" and "pork belly" were exactly), and the lady maitre d' gave me a copy of the menu when I asked if I could take a quick photo of it [no mobile phones or cameras are allowed in the restaurant]. I had left my camera in the souvenir bag anyway so alas, no pics of the marvelous bathroom suite.

After an hour & half (dinner was supposed to start seating within 30 minutes and there were plenty of parties looking nowhere near ready to leave; we were curious how the very polite staff would kick them out), we shared a Sticky Toffee Pudding then made our exit, a few pounds lighter (HA - economics joke). 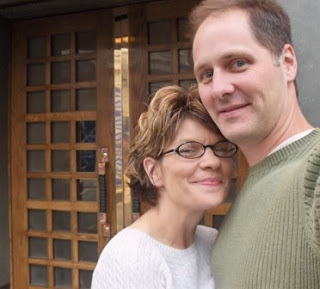 It's fun to pretend you're somebody sometimes.
posted by stephanie at 4:12 PM