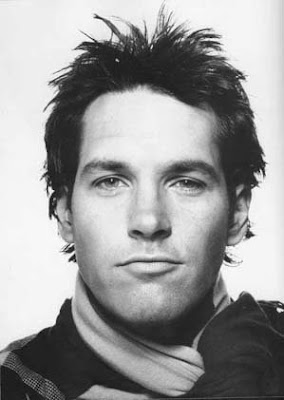 Paul Rudd. You totally nailed that one, he IS the perfect mix of all things lovable.

I Love You, Man is now out in theatres.

After seeing I Love You, Man yesterday (and laughing as much as I ever have at a movie) I will definitely be renting Role Models.

i love that your PS is three times longer than your post.

i also love that i can rely on you to provide me eye candy.

I Loved KISS. Just something about them... so naughty.

And, I am such a loser. All these years I thought it was, "And Party Every day."

And, Paul Rudd is awesome. I was so sad that he was gay in that movie with Jennifer Aniston. I SO wanted them to hook up!

He really was a treat in Role Models.

Now try to relax a teeny bit, while it's still Sunday - and wait while I check - and it's a bit sunny out.

Hope your week is off to a good start.
ox

Oh man. Beth. You have really brought back memories. I had forgotten all about that song. I bought the KISS ALIVE album in Jr High and same thing here, played Beth over & over & over.

I'm sorry. I got so caught in the beam of Paul Rudd's rakish smile that I missed what you were saying.....

He is just too damn cute! CanNOT wait to see I Love You, Man...I keep going to YahooMovies and watching the clips!!
Didn't he also play Phoebe's husband in Friends?

Kiss. I think I have every album they made (in the earlier years)...Columbia House...50 albums for $1...that was such a great deal!!

And God bless the Jim Durhams of the world.

I also was pretty dang scared of KISS as a kid but grew to love them not via the ballad of Beth but by cover bands in college who played many of their uptempo numbers in sweaty, beer-soaked basements and frat hosues: Detroit Rock City, Strutter, and my fave, Deuce.

I ran out, bought Double Platinum and have been in the KISS army ever since.

I agree with the Paul Rudd thing. And to think he started out in the movie Clueless. He has come a long long way. :o)