This is a post to bring people up to speed about my situation (those who aren't already privy to my hourly ramblings on Facebook, that is) and wish you a pleasant holiday season, in case I don't make it back here due to sleeping, gnashing of teeth, or a combination of the two during the coming week.

My bunionectomy (which I found out is a real word when it was written on multiple Official Documents at the hospital; I thought I was being amusing by putting together my malady and the suffix for removal) went well, after a very brief minor breakdown during prep when my IV kept bumping a nerve and causing such pain that I considered yanking it out, which made me even more frantic. I think maybe my veins do me a favor by being microscopic and elusive - they purge all my worrying & fretting early so I have nothing left right before & after the actual surgery.

Another thing helped before I even went into the pre-op area. A 30something dude (and his mom) casually strolled in announcing he was checking in for surgery. When asked if he had sent in his preregistration papers (Like I had! The week before!) he said, Spicoli-like, "Oh yeah no. I didn't send anything." The receptionist gently directed him to fill out a form while she made copies of his ID and insurance cards. "Oh yeah no. I didn't bring any of that in." Eventually his mom went to retrieve his wallet from the truck and all was well. But the combined feeling of smug self-satisfaction and irritation on behalf of the receptionists kept me in a pleasantly distracted state for a few minutes. 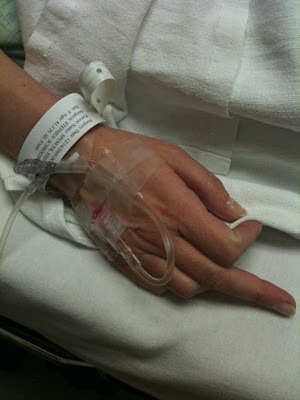 This means "Happy Holidays!" in sign language.
I'm pretty sure. 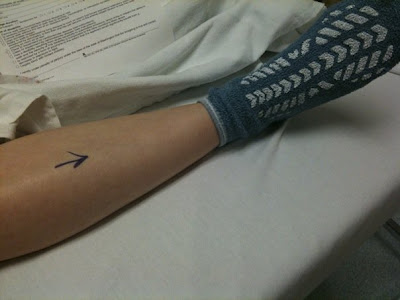 The Importance of Being Certain