It is a strange thing to feel like a part of your body is a distinct entity. Since I visited the podiatrist in November and scheduled the bunionectomy, my right foot seems to have developed a personality. It didn't hurt at all for a week or so after the initial appointment, no matter which shoes I chose to wear, like it was trying to show me how good it could be. Hey, wait a minute! I was just messing around! Being wacky! You don't need to CUT OFF A PIECE OF YOUR BODY! Are you CRAZY??

Then, when I didn't cancel surgery, it became outrageously hostile. The bunion would ache first thing in the morning - after I had been resting my feet for at least 8 hours. It would begin to hurt so much that I had to take off even my most forgiving shoes during lunch in my classroom. By the time I got home and desperately put on slippers, the thing was throbbing.

Two weeks ago, the night before B-Day, it was eerily calm, like a resigned Death Row inmate. Checking in at the hospital, I began to ridiculously think they might send me home since I was no longer in pain; I sensed the bunion smirking at my growing madness. I wanted to poke it, squeeze it, make it scream one last time.

But then a prep nurse came to mark & wash my leg for surgery. She was thorough and loving (in a not-weird way), and it was not only relaxing but reminded me that my right foot was still a part of me, my whole; not my enemy. I started to feel sad for the foot that was losing a part of itself - maybe it resented me for making this rash decision, maybe we didn't have to have such an adversarial relationship. Maybe the morphine drip in my IV was a little strong.

When I came to a couple of hours later, I was of course looptastic (I asked first for my iLover then argued with the nurse that my husband couldn't possibly be back yet from dropping off my kids at school) but soon realized my foot was an entirely new being - and it hurt like a motherf*cker when I tried to sit up. Now I was truly at the mercy of that right foot; if I didn't cater to its every whim, my life would be Hell for a month. Its first whim was a dose of Vicodin every two hours, followed closely by being propped on a pillow like Cinderella's precious shoe every minute of the day. Both of these things ensured I did nothing 'normal' for two entire weeks - no compulsive straightening, rearranging, putting away, getting, doing; not even any meaningful reading because I was constantly on the verge of sleep.

My right foot, while not remotely as majestic as Christy Brown's left one, has taught me some lessons in humility, patience, and meaningful actions. Certainly it has resorted to pain again to teach those lessons, but at least now I feel it is more my wise ally than my cruel warden. 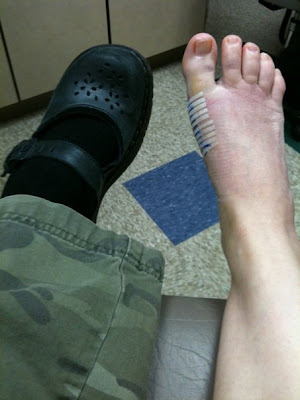 posted by stephanie at 2:07 PM