of vegas and bunions

In the past ten days, I have lived two wildly different lives. 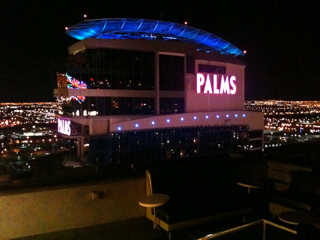 Stu & I stayed here, in a junior suite (our first regular-people room smelled strongly of smoke, and because I did not do a Lindsay-style rant when I brought it to their attention we were rewarded). I took this picture from ghostbar, where supposedly fabulous people hang out inside for $400 per table. We hung out outside for free, standing.
Before heading up to this hot spot, we joined friends for dinner at N9ne downstairs. With our cocktails, onion ring appetizer, and Mediterranean salad & Oscar filet mignon entrees, the bill was something along the lines of a portion of our children's college savings so far. But that is how we gamble - on food, which turned out sublime; I find that far more satisfying than dropping cash into slot machines or onto card tables where I am only guaranteed a watered-down drink and visions of life in a cramped apartment with Nicolas Cage. 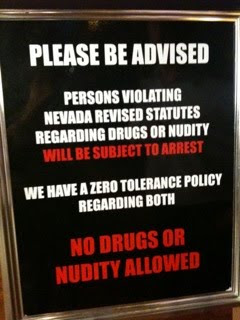 Later we went to Rain where, as you can see, NO DRUGS OR NUDITY were allowed. Just in case we forgot. Our common sense.
I stood in line while Stu ran up to our room to drop off souvenirs from our evening at Crazy Horse Paris (which I have been wanting to see for years - we tried to get tickets in Singapore and when we were actually in Paris but no go. We shared our tiny stageside table with the darling groom-to-be Dirk and his friend Dustin from Boise, who I believe were impressed that people as old and married as we could be funny and even kind of interesting). During my brief-but-felt-like-eternal wait on the Rain line, I met the implausibly named [and coiffed] Demarius. He began our interaction with "That is a very unique tattoo" breathed on my neck in his Antonio Banderas accent. I managed to maintain a respectable conversation despite such diversions as "I am sure your students have crushes on you" and "You are a very hot mom" and the capper, "So...You do not so much party as you just have a cocktail or some wine?" After five hours of my dodging innuendo, Stu reappeared and jokingly asked Demarius if I was bothering him. Then we escaped into the mania of the nightclub. It was 2 a.m. 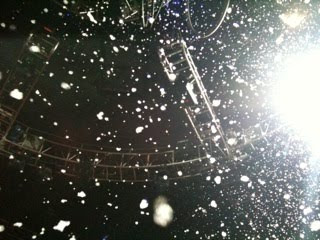 Bubbles were the most innocuous part of the entertainment. There were flames above our heads, bungee acrobats and a suspended ribbon dancer, go-go waifs gyrating on platforms, and performance artists sending sparks over the dance floor by grinding on each other's metal outfits. Like with an actual grinding tool.
Couchsitter 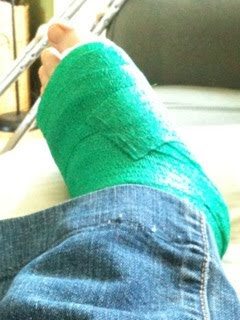 Last week, I had my second bunion removed and have been spending most of my hot mom life sleeping or perusing trashy magazines. Like the first time, surgery went fine despite my high anxiety, and recovery is going alright despite my OCD. Luckily I have a husband & friends who understand my insane way of asking for help, which is to not ask, and just do stuff for me. Even the crazy stuff, like helping me into regular clothes though it doesn't make sense at 7 p.m., or setting up my vast reading station though I'm just going to fall asleep within five minutes of sitting down.
To shake things up Vegas-style, I did have some exciting drama Thursday when I passed out in the morning and threw up twice, prompting a 6-hour ER stay to determine the cause. But alas, the SW Washington ER is not nearly as thrilling as the George Clooney TV version; no one there looked remotely like precious Carter, nobody rushed in bleeding or cursing or shooting up the place, not a bit of dramatic music played during any of my myriad tests. However, on the positive side, I was not diagnosed with a rare & mysterious illness - just plain old low blood sugar/low blood pressure + stupidity on my part.
Though I am not [yet] back to drinking raspberry lemon drops by the gallon or dancing under fire until 3 a.m., I have brazenly worn my tight Merlotte's t-shirt to Blockbuster and chatted extensively with my secret boyfriend. WILD.
I know.
posted by stephanie at 5:14 PM