it's only kind of funny 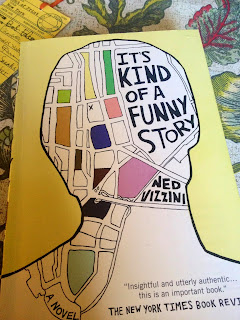 I watched the movie version of It's Kind of A Funny Story a few years ago and loved it - the characters seemed real & relatable, and it felt hopeful in a not-treacly After-school Special way. I wanted to get the novel then, and especially after a student - who had experienced a startling variety of mental health issues in the few years I'd known him - mentioned it was his favorite book. I finally remembered to look for it a couple of months ago while shopping at Powell's in Portland; as I browsed and tried to remember every title I wanted in the history of publishing, this cover caught my eye, a stack of copies facing outward on the shelf. I vaguely registered the Staff Recommendation card tucked under the stack but as I stepped away, pleased with myself and considering how soon I could start reading, I noticed this written on the bottom of the recommendation card: "RIP Ned"

I knew the story was semi-autobiographical but it had ended well; Ned survived adolescence and a troubled young adulthood. I set the book in my basket and shakily Googled Ned Vizzini on my phone. My stomach lurched as I tried not to see the ugly words: "dead at 32"  "blunt force trauma"  "suicide."  I wanted to not read entire sentences, as if that would make the facts untrue, as if I could bring him back by sheer force of willful disassociation.

It took me a few weeks to start reading this book. I was angry at the author - for taking his own life, for doing so in a particularly brutal manner, for leaving his parents and wife and child with questioning despair, for abandoning fans - I felt he had betrayed people like my former student who were inspired to stay alive by his once-positive outlook. I didn't want to read about his journey to a happy ending knowing the real ending was actually so awful.

But, I wanted to revisit those characters who had captivated me in the movie version. I also thought reading about his experiences, even fictionalized, would help me understand him better. And, I guess, if this makes any sense, forgive him. I know, intellectually, that mental illness is terribly complicated. I know it takes over all rational thought with cruel resolve, that even when people are conscious of their mental illness they still feel powerless over its demands. Emotionally, though, I just want people to keep fighting. I want them to fight and fight and fight until they win. I want them to believe that I will help them fight. I, selfishly, want them to just keep living.

I read it. I loved it even more than the movie, which was itself satisfying with a soul-stunningly joyful additional scene of patients singing 'Under Pressure' together. It took me longer to finish than most books because I kept setting it aside, postponing the end of my only connection to its author.

Every word felt authentic - because essentially, it was - and that anguished but hopeful teen boy voice haunts me. I want everyone's children to read it (especially sons), to see how other kids their age have the same overwhelming, terrifying, hopeless feelings they have; I want them to know how others deal with those thoughts, how they laugh at them, and how they find ways to live through them. 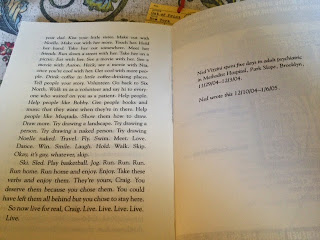