happy happy joy joy (for some, that is)

I got a delightful e-mail from a lovely Brit with an entertaining blog featuring kids' notes. It's like a junior version of Found magazine without the cussing (I think; I haven't explored all of her entries yet...). She's going to include this site's namesake drawing by my angry child. You should go there and relive the joy & angst of childhood.
_______________

At our school last week, we had a competition between our homeroom classes to build a town-related structure entirely of edible substances. There were no milk carton or cardboard foundations allowed, and no toothpicks for supports; this was big-time, people. Many of our students tried to convince us that various non-food items were in fact edible so we had to create the distinction of "Not things you would eat on a dare but stuff the reasonable grocer would call food." Sometimes it is very exhausting working with teenagers.

I had picked up 'a few things' at Target the night before building began just in case we were short some items. Turns out my class is lucky I did so because my one bagful of goods (24 granola bars, a carton of frosting, 1 bag of marshmallows, 1 tray of Red Vines*, 1 bag of pretzel sticks, and some Gummi Bears) was all that showed up for two of the three days we had to create our structure. One kid brought Oreos (accidentally, I believe, but we made him donate some) and I pitched in a handful of my prized peanut butter M & M's, a cashew for the train's smokestack, and a few judicious sprinkles of the organic sugar that I use in my tea.

*Note how few Red Vines are actually involved in the end result. That would be two.

Other entries included this piece by our English teacher's class, which started as an infamous mansion in our town but collapsed in the night and was dubbed "The Fall of the House of Usher": 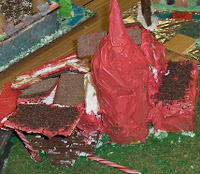 The history teacher's class designed this castle which supposedly does exist in our little paper mill community (I'm still dubious. But not bitter):

We do not, in fact, live in Agra, India but the health teacher's class was pitifully apathetic so one of the students donated her Social Studies model of the Taj Mahal:

The math teacher's class put together a Candyland replica. I have no idea what its connection is to the theme other than there are indeed children in our southwest Washington town who might play the game.

And finally, the study skills teacher backed up her students' rather Emo approach to the project with this merry little number featuring a homeless lean-to, burned-down residence, flooded home, jail, Iraqi bunker, hospital, and orphanage:

The bottom line, besides the very real point that Christmas is not Holly Jolly for everyone, is that our students came together for a few minutes each day with a common goal - to build something using as little of the candy as possible so they could scarf the rest of it. And to kick the asses of the other homeroom classes. It's *sniff* so beautiful.
posted by stephanie at 1:30 PM

It is beautiful. I think this is a perfect post. Each week I love you more, bad mom.

I'll have to go over and check out that other site.

Mrs. G, you're making me blush! And feel a little anxious about having to outdo myself with each post...

The pictures may not do them justice; they were very entertaining.

(And I already loved you, in a not-weird way.)