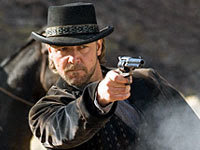 I love this. I think you should host your own little Oscar ceremony this year. Nominations, fashion, you name it. Was Christian Bale nominated? If not he was robbed too.

i'm not sure which is ryan and which is james, but i know which is russell, and he should've won for a beautiful mind...actually, maybe he did, can't wait for the going on and on part.

I have (childless) friends who, every year on the weekend after the nominations, go see all the best picture nominated movies they haven't yet seen.

I want to be them one day.