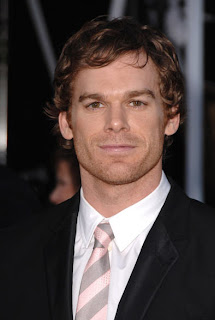 Beware
_____________________________
As I mentioned recently, I have become mesmerized by Dexter. Not just the death angle (though that does pull me in; try not to be afraid) and not just the hottie angle (certainly doesn't hurt), but I am intrigued by the main character's narration. He doesn't just tell us what is going through his mind - Dexter offers a perspective most of us never encounter. Or if we did, chances are we wouldn't understand it (or even want to).

Maybe because he's handsome and kind-looking or because he makes no excuses for his behavior - in fact he admits what he does is technically wrong - or because his often dryly humorous commentary reveals the immense difficulty of trying to appear 'normal,' but I find Dexter phenomenally intriguing. I constantly ask myself what I would do if my own sibling or child or student were like him; I constantly tell myself I don't know. This show remarkably makes sympathizing with a killer easy, and condemning a murderer difficult.

My head and my heart both hurt at the end of every episode.
posted by stephanie at 7:53 PM