che it isn't so

I missed another day of my self-imposed daily posting quest but for good reason.

Because I am a movie fan/history geek/celebrity whore, I bought tickets for me & my man and a couple of amigas fabulosas (I also got some for Amy & her man before I realized that the experience was going to last a quarter of a day in which case her infant son would have wailed himself inside out and who wants that? Only very cruel people) to a "Special Roadshow Edition" of the 263 minute long Che. There was an intermission between Part 1 and Part 2 but considering I foolishly did not eat dinner before entering the theater, that time off was merely a teasing 45 minutes during which I could choose to dash out for nourishment not of the Cinema Food Pyramid OR wait in the 60+ person line for the two-stall bathroom. I started to imagine the whole situation was contrived to make us really feel like those revolutionaries - starving, tired, angry at The Man.

The "Special Roadshow Edition" featured a Q & A with Steven Soderbergh; I secretly hoped a) he would surprise us by bringing Benicio Del Toro and b) they would take turns rubbing my aching shoulders & butt [we could only find 5 seats together in the very. front. row.] after the 6 hour ordeal. Alas, neither happened. But Soderbergh did provide interesting commentary about the research & craft behind the movie. (I would still have really liked a quick massage though).

Overall, the movie was extraordinarily well done on all counts - superb acting, breathtaking cinematography, and in the first half (technically called The Argentine) the back & forth scenes between Guevara's idealistic beginnings and his leading peasant armies through Cuba and his appearance at the UN in 1964 are smooth and provide engaging, fascinating insights. The second half (Guerrilla), though understandably necessary to Che's story, was excruciating after the first half hour [which amounted to only 1/4 of the run time]. Artistically & philosophically it was brilliant - the handheld camera work up & down hills and through the jungles of Bolivia definitely brought me closer to the plight of the people - but I was exhausted, mentally and physically.

I am glad Soderbergh & Del Toro felt strongly about bringing us these parts of Guevara's story in such detail and with such emotion. I think it's too easy for people to draw lines in the sand and put some revolutionaries in the Hero camp and all others on the Villain side, but nobody is truly black or white; perspective is everything, and Che understands that. 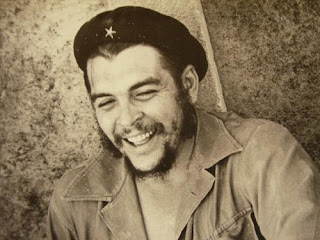 posted by stephanie at 1:49 PM