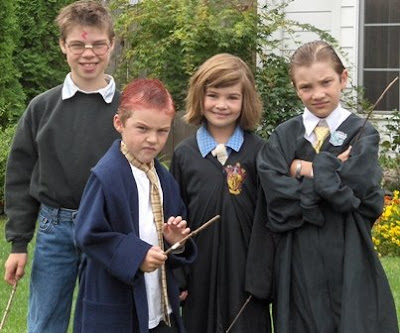 We went to watch Harry Potter and the Half-Blood Prince on opening day with our purchased-4-weeks-prior tickets in hand and spirits as high as the Astronomy Tower. We've been rereading the sixth book though unfortunately did not finish before last Wednesday. Our gang plus my best friend Jen and her three boys still giddily headed to the cinema [feeling British, please play along] for our multiple hour entertainment.

I will say upfront that overall, it is a fantastic movie - satisfying effects, entirely engaging acting, and brilliant writing. However, my kids & I ultimately found the story lacking the depth & drama of the book, and we fear it is an inadequate set up for the next, final installment.

Of course we always know the books are better than the movies; when reading we get to meet the characters in our minds and become their friends (or enemies), we get to see and hear and feel with such clarity it is sometimes difficult to move away to the next sentence or chapter, or book. But it's okay, because we can stop and linger and go back. Movies don't really allow us to do those things, and so even when they are well-crafted & moving (as were the first five in the Harry Potter series), we readers still cling to the original version in our hearts.

In The Half-Blood Prince, we learn the secret behind Voldemort's immortality, a shocking yet tragic revelation that, in the book, makes us slightly though uncomfortably sympathetic to him. We also see the other villains, Draco & Snape, more as individuals with feelings and dreams and fears; they become people we might know, for whom we might wish life had treated differently - in the book, that is. The movie focused so hard on showing how grown-up Harry and company are becoming romantically that it missed what made reading the last two novels aloud to my kids so difficult yet significant - witnessing a person's loss of intellectual & emotional innocence is heartbreaking & telling. Though young Tom Felton did a fine job, the movie Malfoy was given too little time to let us feel for him. And the unbearably magnificent Alan Rickman was allowed criminally inadequate space to embody Snape and his secrets.

This telling seemed unnecessarily abbreviated in parts (and unnecessarily embellished in others) and lightened up for the masses. We went away glad that we hadn't finished rereading, because now we can revisit our Harry and The Half-Blood Prince the way we remember them, and love them.
posted by stephanie at 8:00 AM